from the New Schubert Edition 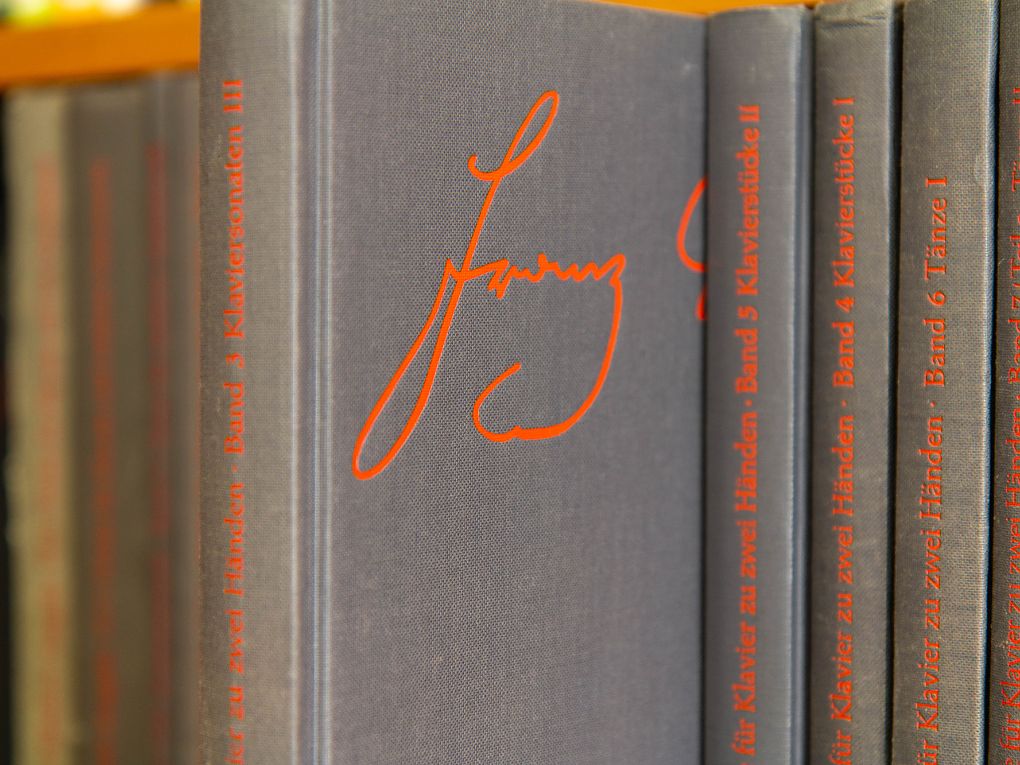 The Mass in E flat major is the last of Schubert’s six settings of the Latin Ordinarium missae. According to the autograph date, the composer began writing it in June 1828. This volume offers an edition of the mass based on the autograph preserved in the Berlin State Library. In addition, it includes all of Schubert’s drafts for the mass that have been handed down and while giving important information about the genesis of the work provide insight into the compositional processes.
In the course of preparing the volume, further considerations were made on understanding Schubert’s accents, which in the editor’s opinion primarily represent a means of musical text reading in this mass. In order to be able to reproduce the differentiated use of accents in the edition, which is evident in the autograph notation, the New Schubert Edition has introduced an additional sign with which different durations of accents can be represented.

This volume, which summarizes and comments on those opera fragments that did not get beyond the initial planning or the early draft stage, reflects Schubert’s “hapless love of the theatre”. The stages during which Schubert’s opera projects remained fragments differ extremely. Like some already more advanced though still fragmentary and far from being performed stage works, which appeared as single volumes of the New Schubert Edition, these fragments, which remained in their early stages, run through Schubert’s entire compositional career. In the course of preparing this volume the editors were able to clarify a number of false attributions concerning authors and subjects, to identify some of their literary models and to find out more about the probably authentic titles. The volume comprises the surviving draft scores for the operas “Wanda” (D 791, previously “Rüdiger”) and “Sophie” (D 982, title so far unknown), which are based on Alexandre-Vincent Pineux Duval’s and Angelo Tarchi’s opéra comique “Une aventure de Saint-Foix” (Paris 1802), as well as the libretto “Der kurze Mantel” (“The Coat too short”) by Johann Gabriel Seidl, which was included in the edition due to its documentary value. 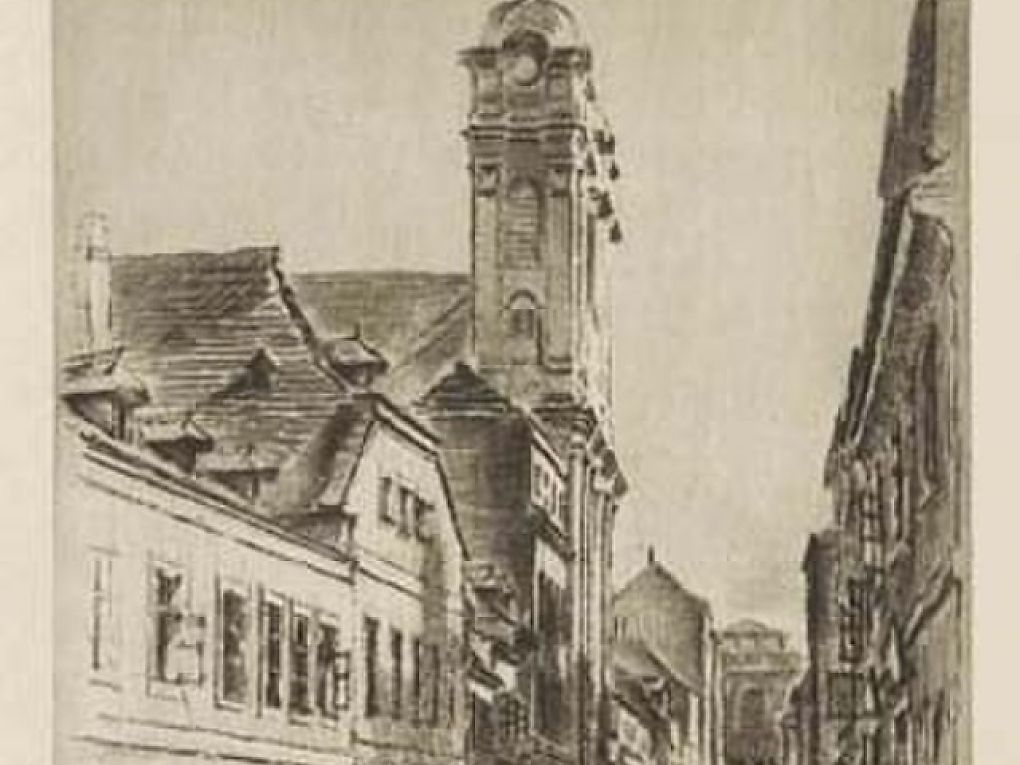 15 and 16 July 2022, Musikwissenschaftliches Institut (Fr. 14–17.30, Sat. 9.30–13)
The Editorial Board of the New Schubert Edition are currently working primarily on Franz Schubert’s masses. The edition of the Mass in E-flat Major D 950 (1828) is about to be completed; the edition of the Mass in G Major D 167 (1815) has begun. The study day will focus on these frequently neglected works. Several members of staff from the New Schubert Edition (probably Rudolf Faber, Matthew Gardner, Christine Martin, and Vasiliki Papadopoulou) will report on the results of their philological and analytical work, before discussing their findings and the editorial process with the participants of the study day.
Please register no later than 30 June 2022 by email to: Dr Rudolf Faber rudolf.faber_at_uni-tuebingen.de

New version of the editorial guidelines 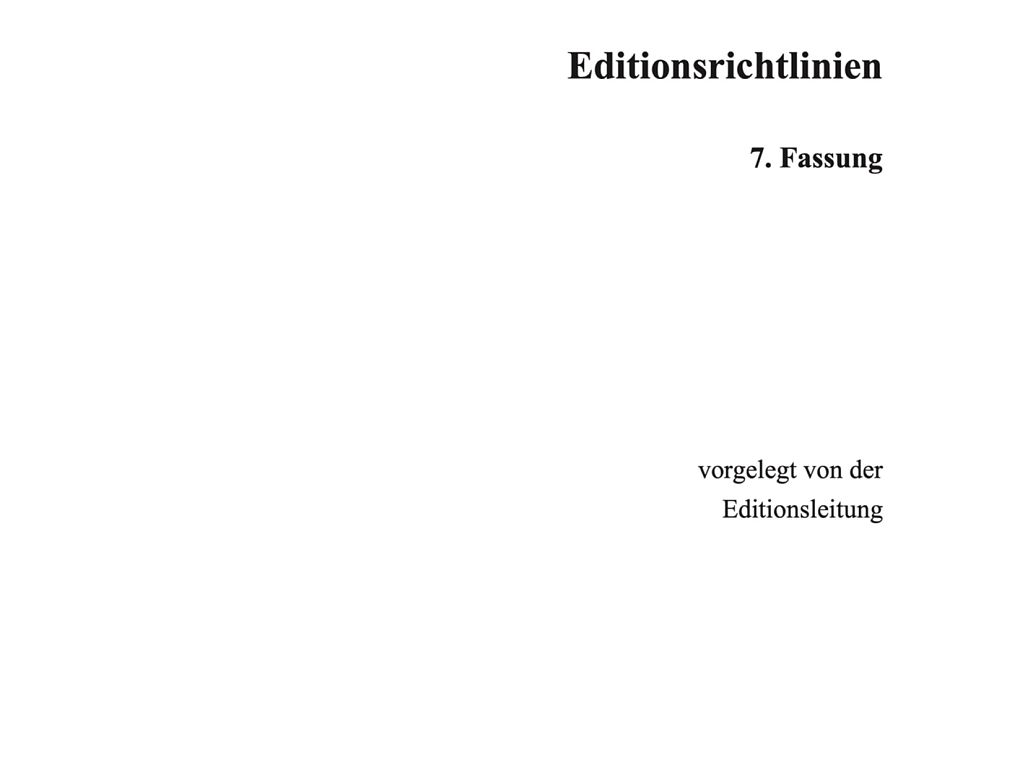 The Editorial Board of the New Schubert Edition have revised the editorial guidelines and have now presented them in a new, 7th version. In addition to formal adjustments and changes due to technical advances, it was necessary to incorporate experience from editing practice into a number of clarifications on the editorial approach. The new version of the guidelines is also available for download here: 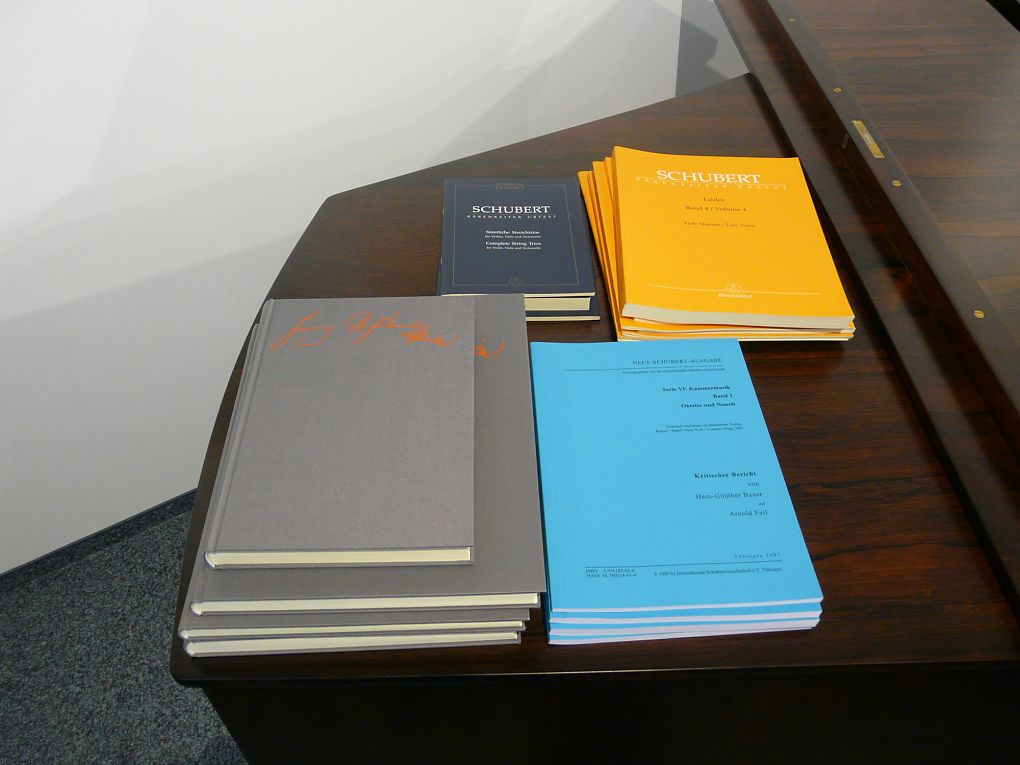 Songs for Several Voices of the same Pitch with Accompaniment (III/3)
Franz Schubert’s songs for several voices with piano or guitar accompaniment were just as popular with his contemporaries as his famous lieder. Schubert got to know singing in multiple parts both in his family and at school; he wrote small cantatas for family celebrations or trios for compositional studies at an early age. In addition to uplifting vocal movements in the style of Michael Haydn, drinking songs for unison choir were created at the same time. The young composer celebrated his first major public success with “Das Dörfchen” (D 598). His more demanding vocal quartets such as “Gondelfahrer”, “Die Nachtigall” or “Nachthelle”, which he composed from 1819 for public and professional performances by the Vienna Gesellschaft der Musikfreunde, are still part of the core repertory of Romantic male singing today.
Other part songs reflect the unique cultivation of bourgeois sociability in Viennese Biedermeier and were created directly on festive occasions in family and friends, such as the “Ständchen“ D 920 based on a text by the poet friend Franz Grillparzer for a student of the singing teacher Anna Fröhlich.
With 46 songs for three to five voices of the same register or unison choir, the present volume offers the entire spectrum of the genre, including different versions of some of the songs and some pieces which remained fragmentary, like the third setting of J. W. von Goethe’s “Gesang der Geister über den Wassern”.

New project on Schubert research at the ÖAW 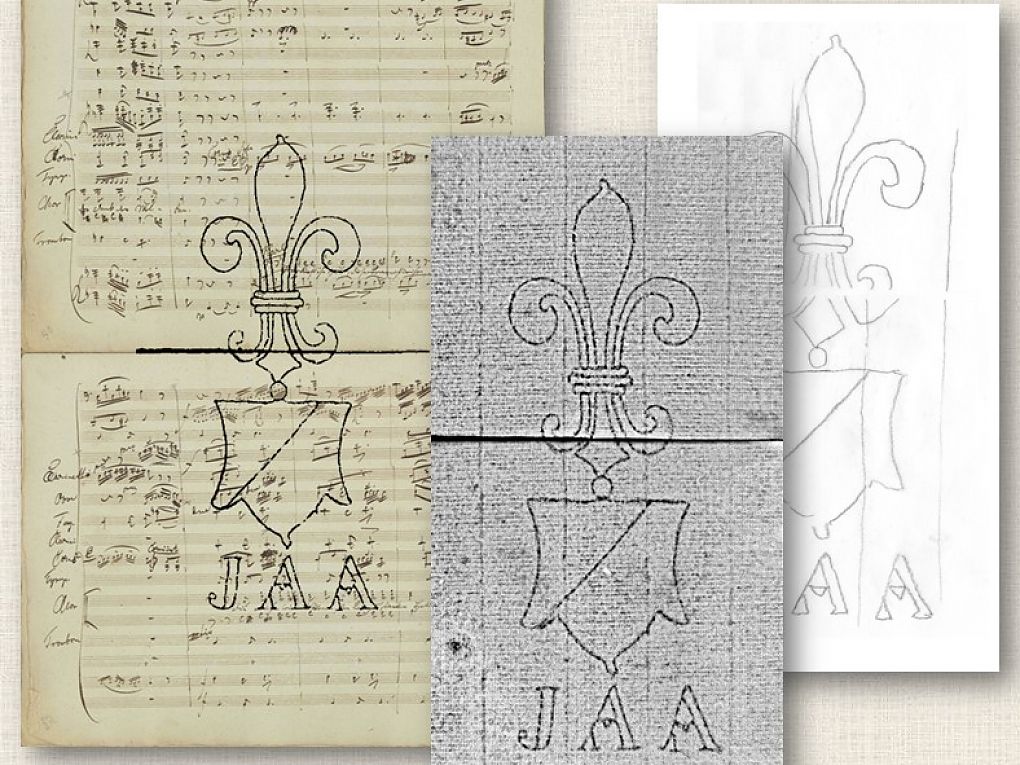 The contemporary processing of watermarks in Franz Schubert’s music manuscripts has long been a desideratum. As part of the Heritage Science Austria funding program, the interdisciplinary project “Digitization, Recognition and Automated Clustering of Watermarks in the Music Manuscripts of Franz Schubert”, which includes thermography, machine learning and signal processing, will start in autumn 2021.

The indexing of Franz Schubert’s music manuscripts is one of the main concerns of the Vienna office of the New Schubert Edition. Dating has been a central task since it began in the 1960s, as it provides additional information on the history of the sources. In doing so, not only Schubert’s handwriting but also the types of paper he used were taken into account. Thanks to the continuous source documentation, the Neue Schubert-Ausgabe can now fall back on a stock of more than 1,300 handwritten watermark pauses.

As valuable as these breaks are, some were created under unfavorable conditions and do not allow a comparative overview. Up-to-date digital visualization and indexing have long been a desideratum. With modern imaging techniques, using thermography, machine learning and signal processing, more objective results can be achieved. This is where the new project (in cooperation with the Institute for Sound Research of the ÖAW) comes in, which makes use of basic ideas from the field of fingerprint recognition, where attempts are made in a similar way to determine from a large number of data sets which of them are assigned to the same fingerprint can. This not only verifies previous results of Schubert research, but also abstracts them towards a common application scenario – the gap between analog and digitally processed research data.

The project is carried out by a research team led by Katharina Loose-Einfalt (Vienna office of the New Schubert Edition) and Günther Koliander (Institute for Sound Research of the ÖAW) and by Andrea Lindmayr-Brandl (Head of the Schubert Research Center Vienna, Paris-Lodron University Salzburg) as a supervisor. In addition, the Vienna Library in the City Hall and the music collection of the Austrian National Library could be won as cooperation partners, which keep a predominant part of the Schubert manuscripts.

Establishment of a Schubert Research Center in Vienna 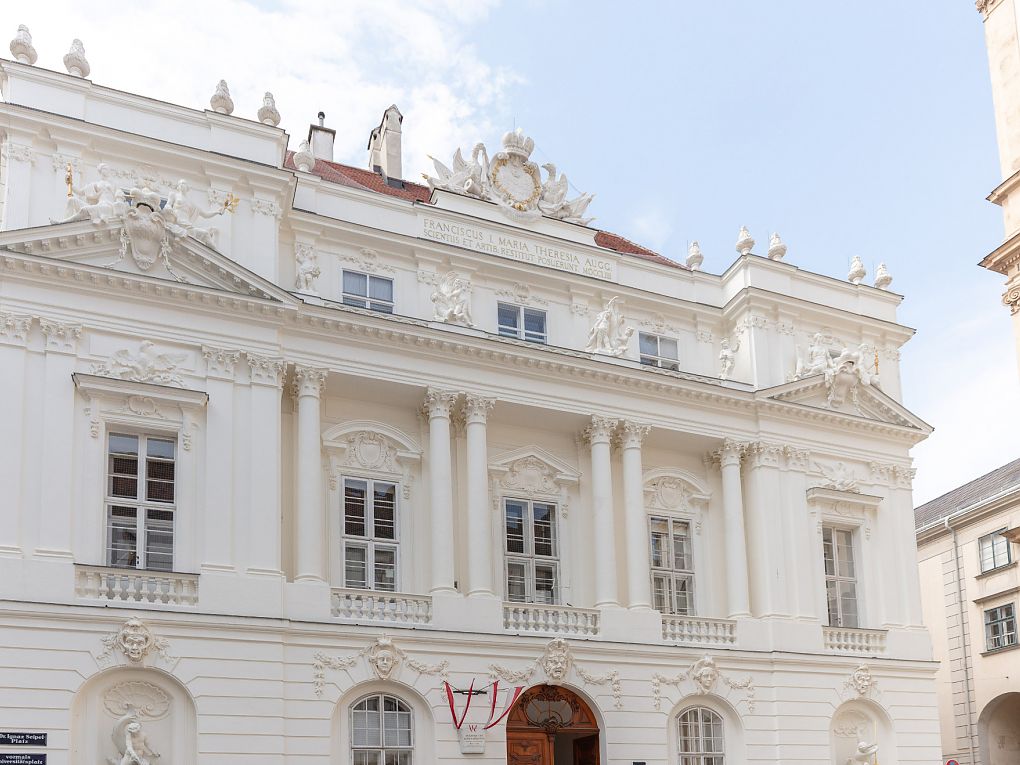 On April 1st, 2021 a ‘Commission for Interdisciplinary Schubert Research’ was founded at the Austrian Academy of Sciences. The aim of this commission is to uncover social networks in the Viennese cultural life of the Vormärz, to highlight connecting and dividing factors across borders and disciplines and, more generally, to understand the world in which Schubert and his contemporaries lived and worked in a more differentiated and comprehensive way. The interdisciplinary platform aims to be the point of contact for international scientists, musicians and the interested public, to organize annual specialist conferences and to seek young scientists.

Another central concern of the commission is the formation of networks and communication with colleagues around the world. For this purpose, a newsletter is sent out at irregular intervals by email, which informs about new publications, calls for papers, events, job advertisements, scholarships, etc. Please provide us with relevant information. You can register for the newsletter here: schubert_at_oeaw.ac.at. You can unsubscribe at any time.

Overtures (V/5)
In addition to his symphonies, Franz Schubert wrote eight finished concert overtures between around 1811 and 1819 (two of them in two versions). With the exception of the “Overture in D” (D 4), which refers to the comedy “Der Teufel als Hydraulicus” (“The Devil as Engineer”) and the “Overture in D” (D 26), the original title of which was cut out of the manuscript, it is all about compositions that are neither associated with a drama nor a program. Therefore, at an astonishingly early date in musical history, they embody the type of the pure concert overture; they are also correspond to this terminologically by explicitly dispensing with any further addition in the title; the epithet “in the Italian style”, which is common for two works, was only given posthumously.
For the first time, the “Italian Overture in C” (D 591) appears in its two authentic versions, contrary to the performance tradition that has proven itself based on a mixture of sources. Likewise for the first time, the widely handed-down but corrupted musical course of the “Overture in D” (D 590) has been rectified.
In the shadow of his symphonies, Franz Schubert’s overtures have been largely underestimated in both reception and musical practice – including the “Overture in E minor” (D 648), with which Schubert penetrates radically new spheres of expression to a greater extent than in virtually any other of his works.